Ask a Magician, a series of blog posts answering your questions! – Issue XIV

John asked me this through a website where I was signed up to answer questions. I thought this one was particularly insightful as it isn’t just asking, “what are the secrets of magic?” / “how do you do it?” but rather about a specific issue that many magicians struggle with. Fortunately, I have some good advice for him, and others. The question was:

How do you speak so smoothly during a performance? I cant seem to do both the trick and the talking at the same time.

The first thing I wanted to note is that often people who see my magic say that I make things look effortless, smooth or even easy. I’m grateful for the compliment, but the truth is it has taken a lot of effort to get to the place I am today.

I’ve written about this before, and how sometimes this misconception about my magic performances can be quite frustrating. Sometimes, I even teach someone a simple trick while I’m at an event, and only then do people realise that I make it look easy.

The secret element is experience. There was a time when my magic wasn’t as good as it could be. In fact, you might say that it still isn’t. I’m always striving to improve, and if I manage that then I will only get better. For those considering hiring me as a magician, it’s useful to remember that the reason my price differs from others is because of that simple concept – experience.

Back to the question at hand though. How does a magician go about creating routines that appear effortless. It’s a simple process.

No magic routine should be performed, until it has both been practised (that is the basic moves learnt), and rehearsed (that is in full ‘costume / outfit’ with the correct timings, as if it were for real).

For me after every single performance I do a short analysis or WWW (what went well) and EBI (even better if) – sometimes this is a physical process of writing in my notebook, other times for events such as close up magic and stage magic, both of which I am very experienced with, it’s simply a mental thing as I drive home.

Even with all of the preparation, mentioned above, it can feel daunting to perform a routine for the first time in front of a live audience. That’s why I have one final tip – don’t try to sing and dance at the same time. A friend gave me this advice when I was in the same position as our questioner. I had practised and rehearsed a routine and wanted to try it out at one of my open performance evenings, but something was holding me back. He advised that I separate the two actions, say the lines, then do the magic movements (open movements, or secret ones 😉) and then I say the next line. Eventually, as the routine improves and evolves, the words and actions come togehther. And that’s why there’s a picture of Beyonce above!

And here’s an example of me singing and dancing (aka. speaking and doing magic) at the same time in Spanish, no less!

Likewise, if you want to find out more about hiring me for your next event. I’ll be happy to help you to organise your event. Contact me here.

Finally, if you would like to learn more about how to learn magic, then get in touch with me regarding one to one tuition, or see my magic products exclusively for magicians.

Posted in Ask a Magician and tagged advice, close up, performance, practice, stage

Learn more about my magic and purchase my exclusive lecture notes by visiting the MAGICIAN’S ONLY page. 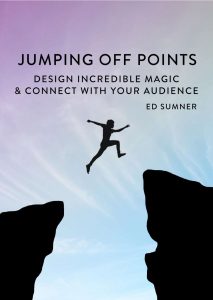 *honestly, if you’re not a magician (and don’t know the lingo we use) this isn’t going to be much use to you.