Ask a Magician, a series of blog posts answering your questions! - Issue X

In this tenth issue, the question came to me via email and Lauren asks:

Do you ever perform magic tricks in non-paid settings for friends?

Well, there is this joke between professional magicians, that we don’t perform outside of work, because we would get bored of performing the same routines all the same, and it’s partly true. It can get quite annoying when people say, show me a trick and sort of expect you to start performing.

I do, of course, have some routines that work well in those situations (when it's not a paid event) but it is a very different environment to the type of magic that I usually perform. So the short answer is, that yes I will perform something if I'm pushed to, but generally though, when I’m with friends, I prefer people to get to know me as a person rather than the slightly altered version of reality that is the 'performing me'.

I guess this is best described by thinking about my close friends, girlfriend, family, etc. They have seen my magic both at my paid shows and in casual environments, but it would be annoying for them if I kept showing them magic all the time (wait! in contradiction to my first line there are some annoying magicians who do that!) What I'm trying to say is, when I'm watching a movie, hiking a trail or visiting a health spa, it would be pretty stupid, I think, to not make the most of that moment there and then. Most of the time magic doesn't fit in that moment. 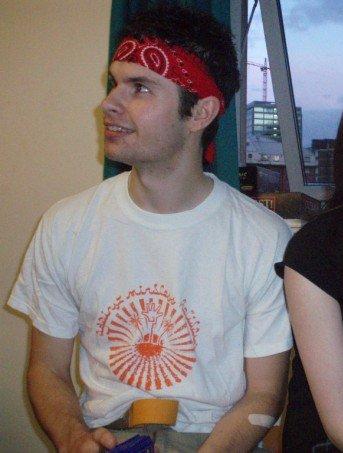 So, where does magic fit? Well, take a close look at this picture of me from my time at university. Guess what I'm holding, yep, a pack of cards! (by the way, it was a fancy dress party!) Close up magic fits really well in social situations, so when we're at a bar with a few friends or having a party for Halloween or Christmas, I might share a few new routines that I'm working on and that's a great place to incorporate a little magic.

Talking of developing new routines I am also moving more towards stage magic and because of that, I run a regular night of magic called Magic with Friends. That's set up like an open mic night style event for magic and it's a great place for me to try out new material. It's free so it also means that if I'm in one of those situations where magic doesn't fit, I can suggest people come along to one of those nights and they can enjoy magic within its correct setting.

← Why is there such a range in prices between magicians?What exactly is sleight of hand? →